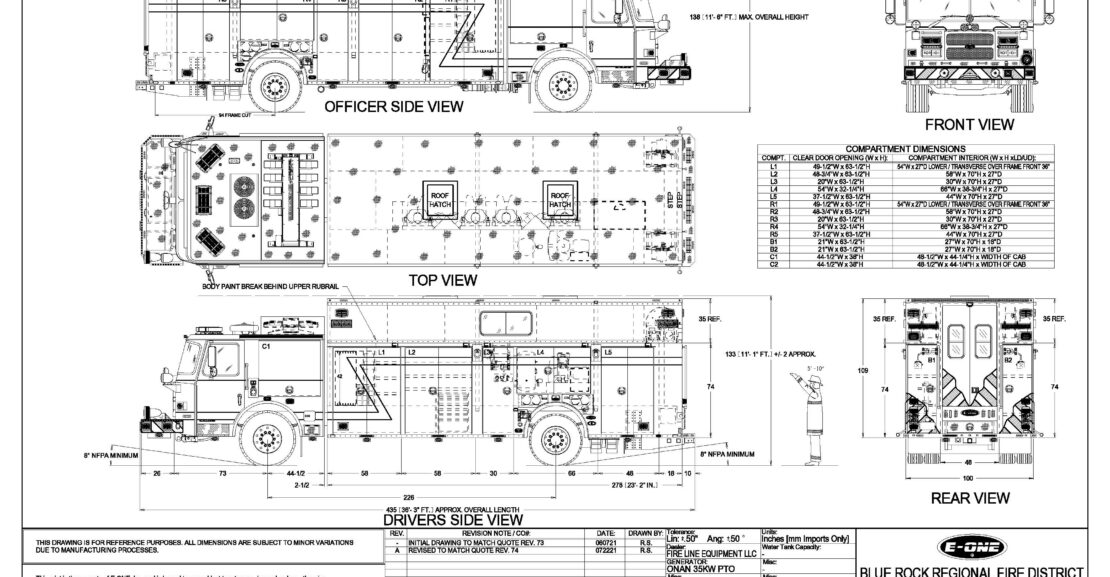 Thank you and congratulations to the Blue Rock Regional Fire District, Millersville, PA (Lancaster County) on their order of a E-ONE Cyclone Heavy Rescue (Walk-In)!

The District has a board that consists of three members from Manor Township, two members from Millersville Borough, a representative from BRFR and the District Fire Commissioner. This board oversees all financing of the District’s fire and emergency management activities along with policies and procedures. The District owns and maintains all building and equipment, taking the burden of fundraising off the firefighters.

Blue Rock Fire Rescue
BRFR handles all of the fire and emergency management related activities in the District. BRFR has its own Board of Directors and Line Officers. BRFR performs the following types of activities: Structural firefighting, heavy vehicle and industrial rescue, water rescue, wild land firefighting, and is also the home organization for the Lancaster County Rescue Task Force. In addition, the District signed an affiliation agreement with Keystone Wild Land Crew to work mutually on large scale brush and wild land fires. This affiliation agreement, along with the “Special Operations” membership classification allows highly trained and qualified individuals to join BRFR even if they live outside the District to assist with special operations calls.

Blue Rock Fire Rescue Support Group
Many members of the formal fire companies had a desire to continue to assist Blue Rock Fire Rescue and their communities by continuing the tradition of a firemen’s festival and various other community based fundraisers. The BRFR Support group was formed as a non-profit organization under the District to raise funds for BRFR, and also to continue the link between the communities and their fire companies. On the second and third Saturday of each July, the BRFR Support Group holds its annual Tomato Festival at the Manor Township park in Washington Boro at the corners of River Road and Route 999.

The District’s 55 square miles includes a wide range of properties and hazards. Within the District is Millersville University and its 10000 students and staff, Turkey Hill Dairies, The Lancaster County Solid Waste Management Authorities’ Frey Farm landfill, Armstrong World Industries former headquarters and every type of land use from suburban neighborhoods and a borough to very rural areas. Manor Township also has an extensive farming community.

Creation of Blue Rock Fire Rescue
Informal and irregular meetings between West Lancaster Fire Company, Millersville Fire Company, Highville Fire Company and Good Will Fire Company of Washington Boro began in 2004. The intent of the meetings was to find a way for four separate fire companies which protected Manor Township to find a way to report activities and needs to Manor Township governmental leaders in a unified and coordinated manner. A consolidation was not anticipated when these meetings were first scheduled.

In 2008 with the help of the Pennsylvania Department of Community and Economic Development it was decided to involve a wider cross section of the community in the discussions. A committee was formed to study the feasibility and practicality of merging the four fire companies into one entirely new organization. Because Millersville Fire Company serves Millersville Borough as well as Manor Township, borough representatives were invited to join the effort. This committee was known as the Emergency Services Task Force and included one representative from each fire company, one citizen representative from each of the fire company service areas, two representatives from each municipality and one citizen at large.

To get task force activities started each fire company committed $25,000.00 to an operating fund in order to finance the project and demonstrate commitment to the effort. The task force hired a consultant to determine current community assets and needs and to conduct a feasibility study for the consolidation. The study showed that merging the four fire companies would be beneficial to the community as well as the fire companies.

In April of 2010 the study was presented to the elected officials in Millersville Borough and Manor Township for their approval. On July 29, 2010 the members of the four fire companies, in a joint meeting, approved the consolidation. The two municipalities reviewed the study and on September 28, 2010 Millersville officials approved the merger and signed an intergovernmental cooperation agreement. The agreement created The Blue Rock Regional Fire District as the governmental agency responsible overseeing fire protection in the two communities.

With the study complete and recommendations delivered to the two municipalities, the Emergency Services Task Force was decommissioned, a few members agreed to help Blue Rock Fire Rescue complete the remaining tasks needed to finalize the consolidation. The remaining task force members joined the officers and members of the four companies and formed the Implementation Task Force. The Implementation Task Force was divided into two committees and numerous sub committees to deal with tactical and administrative issues.

The name Blue Rock Fire Rescue was selected from entries submitted by members of the four companies. Blue Rock Road runs through Millersville Borough and Manor Township. The member who proposed the name chose Blue Rock as the basis of the name because is a part of the long history of the two municipalities and the four fire companies.